Prior to MediaTek, he was at Quantenna Communications, a fabless semiconductor company focused on Operator Wi-Fi solutions, since 2014, where he served as Vice President of Product Marketing overseeing the company’s entire inbound as well as outbound marketing activities. Prior to Quantenna, James held senior Product Marketing positions in Broadcom, where he managed 4G LTE modems for smart phones, as well as Marvell Semiconductor, where he was a founding member of the Wi-Fi business unit.

James studied at the University of California at Berkeley where he received Bachelors, Masters, and Ph.D degrees in the area of Electrical Engineering and Computer Sciences. His research area was the statistical modeling of advanced semiconductor process variation for optimal manufacturing yield. He has published over 30 technical papers and has been granted over 10 patents. In his spare time, James is an avid tennis player and enjoys watching engrossing dramas and documentaries. James’s 15 seconds of fame is that he once stood next to Steve Jobs in an elevator and asked him why he didn’t wear a watch. 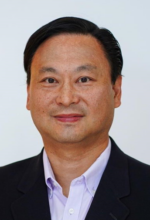