He joined onsemi in 2019 through the acquisition of Quantenna where he helped in the development of 4×4 and 8×8 MIMO Wi-Fi systems. Previously, Dr. Rath developed several generations of cellular systems as Director of Systems Design at Broadcom, and as Vice President Network Systems Engineering at Beceem Communications. Earlier in his career, he has also served as Director of Venture Technology at Siemens TTB, and Assistant Professor of Electrical Engineering at the University of Texas at Dallas.

Dr. Rath has a Ph.D. in Computer Science from Indiana University, Bloomington. He holds 21 U.S patents and has made significant contributions in IEEE and 3GPP wireless standards. 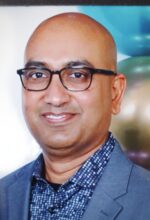