Richard Clarke is an internationally known expert on cybersecurity, having been the first “cyber czar” for the US Government and author of the first National Strategy for Cybersecurity. As a government official for over 30 years, he served in senior positions in the White House (Special Assistant to the President), State Department (Assistant Secretary), and the Pentagon.

Since leaving government, Clarke has authored ten books, including a #1 national bestseller and two seminal books on cybersecurity, Cyber War (2010) and The Fifth Domain (2019). Clarke also founded Good Harbor in 2004, has taught at the Harvard Kennedy School, worked as an on-air expert for ABC News, and has served on multiple boards of directors, including MultiPlan (nyse: MPLN), Veracode, Sectigo, and the Middle East Institute. 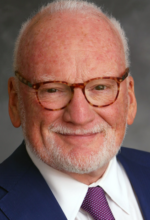