After earning a Masters Degree from Twente University in the Netherlands, Mr. de Vegt entered a career in Management Consulting in the High Tech and Telecommunications Industries. In 2001, he Co-Founded Airgo Networks Inc. a start-up company based in Palo Alto CA, which pioneered the commercialization of MIMO technology in WLAN systems. This company was acquired by Qualcomm in 2006.

He is currently a Vice President of Technical Standards in the connectivity semiconductor business unit of Qualcomm and has been an active participant in the Wi-Fi Alliance and WLAN industry since 2001. In the Wi-Fi Alliance he has been in leadership positions in Marketing task-groups for major MAC/PHY programs such as Wi-Fi 4 (802.11n), Wi-Fi 5 (802.11ac), Wi-Fi 6 and Wi-Fi HaLow.

He serves as the Treasurer on the Board of Wi-Fi Alliance and is a member of the Board of Directors of the Thread Group. He is the ‘standards lead’ for Qualcomm’s participation in IEEE802.11 standardization. 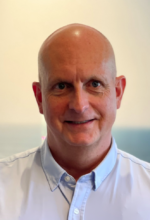