The Wireless Broadband Alliance (WBA) – not to be confused with the Wi-Fi Alliance – last week released a comprehensive paper outlining their views on the new 802.11ax Wi-Fi standard. Not surprisingly, the WBA is trying to squeeze the AX square peg into a ‘5G’ round hole.

The ‘5G’ story is arguably both oversold and overhyped but that is not stopping some industry organisations – even some unrelated to the core of the ‘5G’ ecosystem – to jump on the runaway ‘5G’ bandwagon. Add to this category the Wireless Broadband Alliance, or WBA.

The WBA’s new 802.11ax paper – which can be found here – attempts to position AX as ‘5G-capable’ and the WBA as the organisation that will bring Wi-Fi into some kind of unified AX and ‘5G’ ecosystem. Although not stated in so many words the tactic of trying to drag AX into the ‘5G’ world now appears to be one of the WBA’s most important missions.

A quantum leap forward in all categories

That said the report is worth reading if purely from an AX features and benefits point of view. And there can be no question that AX represents a quantum leap forward for Wi-Fi technology in nearly every performance category. Of all the categories, raw speed is perhaps the least important.

The most important – which is also at the top of the WBA’s list of features – are arguably uplink/downlink OFDMA and scheduling. Support for 6 GHz is mentioned mostly as an aside. Oddly, lower latency – which to our knowledge has never been an issue in Wi-Fi – is also listed as a benefit.

The paper also mentions a favourite AX aspect not often discussed: The new standard will apply much more widely to IoT use cases given the range improvement (some say up to 4 times current cell radius) and lower battery consumption as a result of the ‘target wake time’ feature.

Be warned: WBA is not really about Wi-Fi

Confusing the WBA with the Wi-Fi Alliance is a common error even though the two organisations are entirely unrelated. Since 2003 the Wi-Fi-related goal of the WBA has been making sure that Hotspot 2.0-based Wi-Fi roaming works across the world.

However neutral the WBA may look on the surface, the organisation is largely driven by the shifting corporate interests of AT&T and BT. After 15 years the WBA is still mostly managed by their executives. On the other hand the Wi-Fi Alliance – a non-profit formed in 1999 – is the world’s governing body for Wi-Fi certification and also holds the trademark rights for the Wi-Fi name itself.

Outside the WBA’s talk of bringing AX and ‘5G’ together ostensibly for the benefit of carriers there is little real activity on that front. Instead the industry is right now focused on developing residential and enterprise AX products – two segments that likely represent more than 90% of the total market.

AX yes. But for how long?

So for now the WBA seems to be supporting AX. But do not be surprised in a year or two if the exact same people take a U-turn and become more interested in invading Wi-Fi (unlicensed) bands with ‘5G’. The fact that AX is way ahead of anything ‘5G’ – as evidenced by the predictions below (source: WBA, ABI, and GSMA) – is probably the only thing stopping them today.

For more about the relation between 5G and Wi-Fi have a look at this story that we wrote about a year ago. We still have found no evidence that would compel us to change our view. 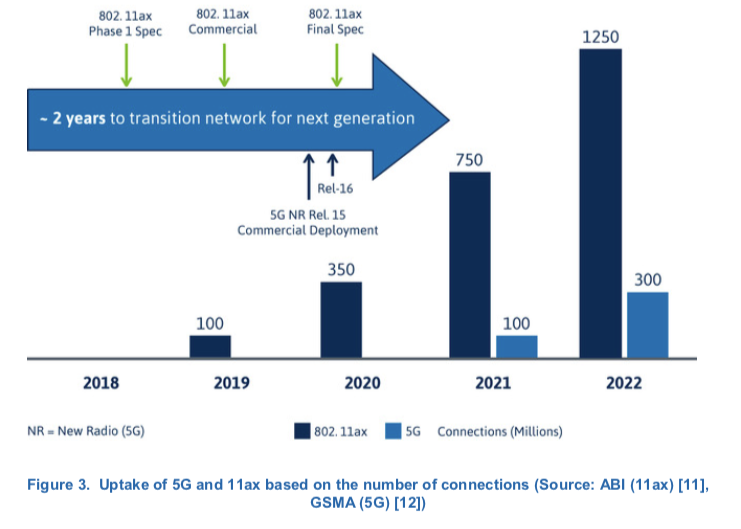