Today the Kingdom of Saudi Arabia announced its intention to release the full 6 GHz band to unlicensed use meaning that once the process is completed, 1.2 GHz of new spectrum will be made available to Wi-Fi. With this new regulation Saudi Arabia becomes the first country in the Europe, Middle East, and Africa region to release the full 6 GHz and will lead the world in total available mid-band license-exempt spectrum.

According to the Saudi regulator CITC’s press release “the historic and regionally unprecedented expansion of spectrum allocation for license-exempt technologies set out in the outlook, by making the 5.925-7.125 GHz and 57-71 GHz bands license-exempt, elevates Saudi Arabia beyond regional leadership to become a key global leader in innovative digital regulation.” The press release also says CITC’s decision will “supercharge the digital service market.”

With the decision Saudi Arabia joins the USA, South Korea, Chile, Guatemala, Honduras, and most recently Brazil as countries who have allocated the full 6 GHz band to Wi-Fi. The CITC says Saudi Arabia hopes that its new policies “will motive other countries in and out of the region to follow our lead.”

According to Chris Szymanski, Director Product Marketing & Technology Strategy at Broadcom, the CITC’s decision is an inflection point for the entire EMEA region. “We congratulate Saudi Arabia for taking the lead on releasing the full 6 GHz band and we strongly believe that the decision will positively impact unlicensed spectrum decisions not only in the Middle East, but in the entire region,” Chris Szymanski says.

Also according to Chris Szymanski – who is following the CITC’s regulatory process in detail – the specific technical rules are not yet decided given that the initial focus by CITC was on the designation of license-exempt use for the band.

The technical rules will be determined in a follow up consultation the starting point of which may be the draft “Specification for Data Communication Equipment operating in License-Exempt Frequency Bands (RI117)” published on March 2 this year.  This draft set of  rules posits 1 Watt power and portable device operations, both of which will be instrumental in enabling digitally immersive experiences throughout the Kingdom, Chris Szymanski says. For more also view the full formal statement from Saudi Arabia’s regulator CITC (Communications and Information Technology Commission) here. 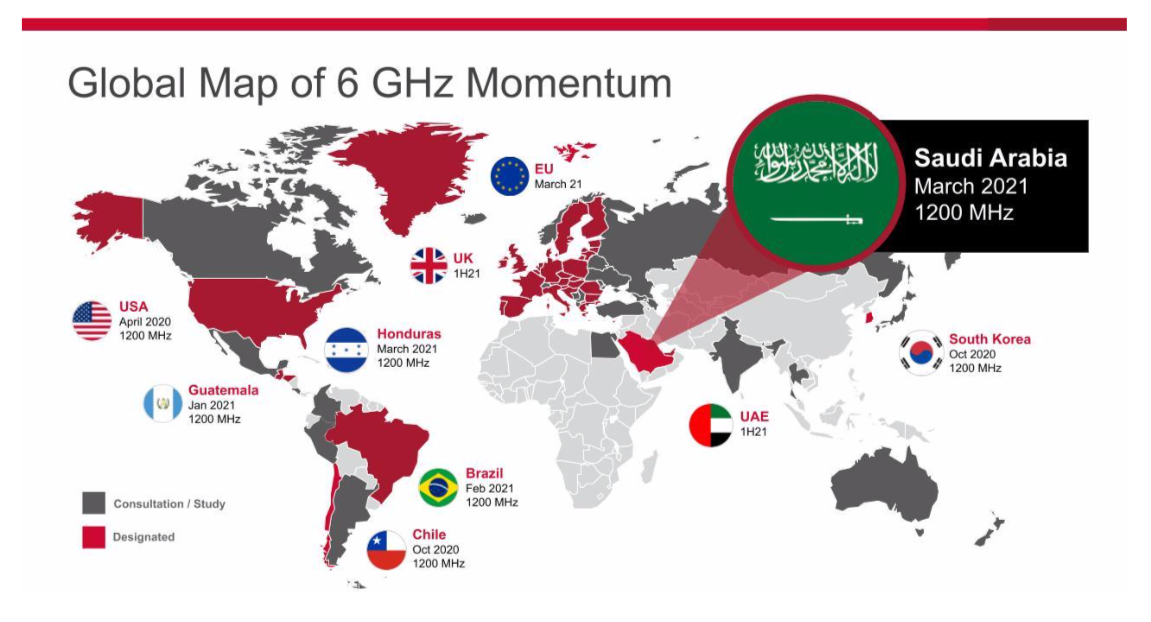 Above: 6 GHz momentum across the world. Source: Broadcom.