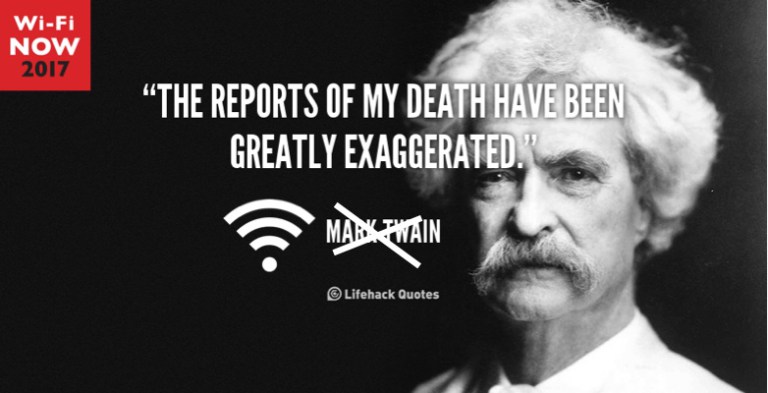 Why mobile could never kill off Wi-Fi

We’ve heard it before: Tech media predicting the end of Wi-Fi. This time the culprit is Bloomberg Technology and a host of syndicated publications. But actually, nothing could be further from the truth.

A couple of weeks ago Bloomberg Technology ran this headline: ‘A World Without Wi-Fi Looks Possible as Unlimited Plans Rise’. The verdict from the analyst community (myself included) is unanimous: Nope, never gonna happen.

It’s actually the reverse: Carriers need Wi-Fi more than ever

The reasons why are so multitudinous that is hard to know even where to begin. So let’s start here: Imagine what would happen if some 60-70% of phone data traffic currently carried on Wi-Fi networks moved over to cellular.

Mobile carriers would need to triple capacities. Even if it were possible (there’s probably not enough spectrum to allow this) it would cost billions of dollars. Add to this that current plans are ‘unlimited’ so tripling capacity would produce no additional revenue. It’s a deep red business case.

By the same logic carriers need Wi-Fi more than ever in this age of ‘unlimited’ data plans. Also note that data plans are not really ‘unlimited’ – instead they throttle down speeds once large data buckets have been exhausted.

Another salient point is this: Wi-Fi services are substantially faster than mobile data rates. This is a well documented fact. Remember also that phones will automatically prefer connecting to known Wi-Fi networks unless users actively delete such networks from device memory. And it’s hard to see why anyone would want to do that.

Recent traffic data supports the view that ‘unlimited’ mobile plans have had a largely unnoticeable impact on Wi-Fi usage. We’ve written about it here. It’s counter-intuitive, but evidence (including from Devicescape here) suggests that additional availability of Wi-Fi bandwidth stimulates demand so that both Wi-Fi and mobile traffic increases.

If you want more compelling reasons why mobile 4G or 5G will never kill off Wi-Fi, read this blog by analyst Dean Bubley here.

One reason for renewed interest in killing off Wi-Fi could well be the announcement – specifically by T-Mobile USA – that US mobile carriers are to begin deploying 4G in 5 GHz ‘Wi-Fi bands’. We don’t know how extensive such deployments might be, but we’re guessing that they will be fairly localised. From the most cynical point of view, LTE-U is a carrier’s way to get subscribers to pay for a service that they would otherwise get for free – with Wi-Fi.

But the idea that LTE-U or prospective 5G unlicensed (yes, that’s coming up soon as well) would replace Wi-Fi is absurd. Carriers have no technical or economical way of replacing hundreds of millions of low-cost Wi-Fi networks in homes and businesses – and more larger enterprise and city Wi-Fi networks are being built every day.

And don’t forget that hundreds of millions of devices without SIMs still need connectivity.