We’re delighted to announce that our first inductee into the Wi-Fi NOW Hall of Fame is Dr Michael Marcus of Marcus Spectrum Solutions. Dr Michael was honoured during a short ceremony at the Wi-Fi NOW DC conference on April 18, 2017.

The reason for the Wi-Fi NOW Hall of Fame is that we all have a debt of gratitude towards individuals who have made exceptional contributions to the Wi-Fi industry. We want to honor them. In the case of our first ever member of this Hall of Fame, his contributions can be explained quite simply by Claus Hetting:

“If it weren’t for him, we could simply not be here discussing Wi-Fi today. In fact, there would be no Wi-Fi  because Wi-Fi – or WLAN – would not even have band to operate it.

He is the Founding Father of the ISM bands, and thus laid the groundwork for rules for bands that would become the operating bands of Wi-Fi & Bluetooth. This was in 1985. More than that, he’s also widely responsible for the FCCs adoption of rules for the 60 GHz mmWave bands that were approved in 1995.” 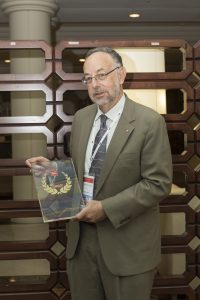