You are likely not aware of it but the chances of your Internet traffic having passed through a Broadcom chip on the way to your eyes and ears is a staggering 99%. Now the company is offering a rare glimpse into the minds of some of the connectivity industry’s most accomplished leaders. The live interview series ‘Connected by Broadcom’ starts this Tuesday featuring Broadcom Chief Operating Officer, Charlie Kawwas.

Over the years Wi-Fi chipset leader Broadcom has racked up a long string of firsts including being the first to make available of 6 GHz Wi-Fi chips for devices and access points. Add to this over a decade of delivering technology to drive forward better connectivity over cable, fibre, Bluetooth, and more. According to this blog the company has increased the speed of its Wi-Fi chips a staggering forty times over the past decade.

So what has lead to the company’s overwhelming success? Now is your chance to find out. In the coming weeks and months Broadcom will be offering a rare behind-the-scenes look at the inner workings of the company at the executive level. Broadcom’s own Vijay Nagarajan, VP Mobile Connectivity Division, will be interviewing other Broadcom executives and their customers to discover a lot more about what drives the company’s executives and what forms their collective vision going forward.

The first ‘Connected by Broadcom’ live interview will be streamed over LinkedIn this Tuesday July 20 at 9 am PDT (6 pm CET) directly from Vijay’s LinkedIn page here and it will feature Broadcom’s Chief Operating Officer, Charlie Kawwas. This will be a great chance to get insights direct from perhaps the world’s most successful creators of connectivity technology – so don’t miss it! 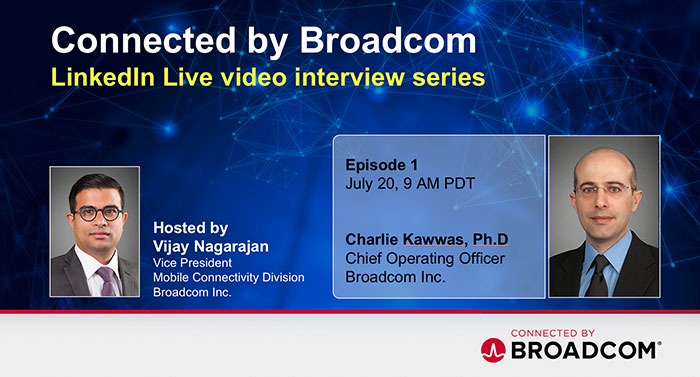