Indoor Wi-Fi 6E is here already with a raft of routers already released at CES just weeks ago – but when can we expect to see 6 GHz Wi-Fi operating outdoors for use cases such as fixed wireless access, smart cities, and campus networks? At Wi-Fi NOW we’re guessing that the first test deployments could happen within a few months. And now there’s even more good reasons to be optimistic about outdoor 6 GHz Wi-Fi following the Wi-Fi Alliance’s release of the first draft specification for the AFC function late last week.

Here’s the backstory: The FCC’s regulation on 6 GHz Wi-Fi allows indoor devices to operate in the full 6 GHz band (at ‘Indoor Low Power’ or ILP) while outdoor so-called ‘standard power’ is permitted only under the application of the AFC function and only within the U-NII-5 and U-NII-7 bands. For an access point to operate at standard power it will need to query an AFC database. The AFC scheme ensures that 6 GHz Wi-Fi standard power operation will never interfere with incumbent uses of the 6 GHz band – such as utility companies using the band for point-to-point links.

6 GHz Wi-Fi outdoors: A huge opportunity for many

The spec – which can be downloaded here – is the result of a cooperative effort among Wi-Fi Alliance members and marks the beginnings of a standardisation process that could lead to massive adoption of 6 GHz Wi-Fi in outdoor areas across the US, such as for municipal Wi-Fi, campus networks, perhaps for stadiums and other outdoor sports facilities, and not least for broadband service providers including for example cable operators and WISPs.

With more than 800 MHz of spectrum available in the U-NII-5 and U-NII-7 bands, standard power Wi-Fi in the 6 GHz band is arguably a huge opportunity for the creation of new W-Fi 6E-based services particularly for outdoor use cases. Indoor standard power Wi-Fi is also allowed – as long as AFC lookups are applied – which could lead to certain indoor APs delivering longer-range Wi-Fi 6E services as an additional Wi-Fi connectivity layer for residential services.

How much spectrum will realistically be available?

What we don’t know is how much of the 800 MHz of spectrum will be available for Wi-Fi use in specific areas. This will depend on to what extent incumbents are using the band in a given area. There are some tens of thousands of incumbent 6 GHz links across the US that need to be protected by the AFC scheme but don’t forget that the US is also a huge landmass. Our best guess is that in most areas some hundreds of MHz of band will be available for outdoor Wi-Fi and in some areas the full 800 MHz may indeed be available.

Other than Federated Wireless – a current provider of the similar database systems required for CBRS – it is not yet clear what companies in the end may provide the needed commercial AFC services. Google has previously been involved in similar activities in support of TV White Space dynamic spectrum management. 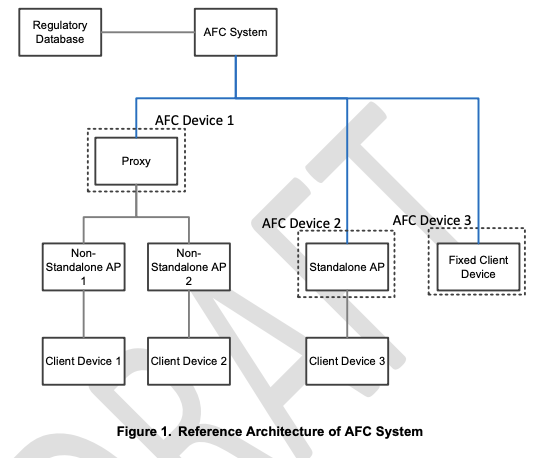