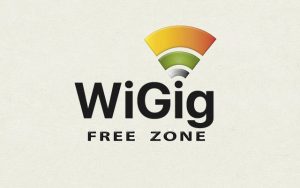 Apple has long been rumoured to be working on an iPhone that includes WiGig. But what exactly is it and how will it change the way we connect?

It’s been years underway: The Wi-Fi standard that’s twice as fast as gigabit Ethernet and more than five times faster than current 802.11ac. It’s called WiGig, and the certification program was launched by the Wi-Fi Alliance in October of last year. But what can we expect from this brand new kind of Wi-Fi and what could new use cases look like?

Wide, clean GHz channels means speed – and lots of it

WiGig works in the unlicensed 60 GHz band (in the US this is 57-71 GHz, in Europe 57-66 GHz), slicing it into 2.16 GHz channels. In comparison, 802.11ac channels start at 20 MHz with options for channel bonding up to 160 MHz-wide channels. That’s less than a tenth of the channel width of just one WiGig channel. For the time being, unlicensed WiGig spectrum is plentiful and nearly entirely unused.

So we will for sure get plenty of speed. Peraso – one of only a handful of WiGig chipset vendors – says up to 8 Gbps is achievable. A WiGig in-home router from TP-Link launched last year boasts top speed of 4.6 Gbps.

WiGig: A platform for innovation

But like everything else that the Wi-Fi industry puts out there, WiGig is much more than just another wireless access standard. It’s a platform for a litany of new use cases and new applications. That likely will include innovations in tech and business models that we can hardly imagine today.

WiGig supports direct mode (essentially wireless replacement for cabling) as well as an infrastructure (network) mode for the home, enterprises, and service providers. And here is a critical point: WiGig will shift dynamically to and from common Wi-Fi in the 2.4 and 5 GHz bands (802.11n and 802.11ac) as part of a triband connectivity network. This is a critical feature as WiGig coverage – even inside the home – is bound to be spotty.

We can only imagine what blazingly fast, zero-lag WiGig might do for gamers, VR, & AR in the home and elsewhere indoors, including finally getting rid of all that messy cabling around the house or office. Or consider syncing your smartphone and backup it up in seconds.

While indoor direct-mode (and short-range) WiGig is likely to be the fist major application to hit the markets, WiGig-enabled triband networks hold tremendous promise for the enterprise and even for connectivity in public spaces.

Imaging how a few seconds of walking past a LinkNYC WiGig-enabled kiosk in New York could download a entire movie to your iPhone or let you scan the neighbourhood with sci-fi-style AR. If you’re sitting on a city bus, you could even sync your tablet to the Cloud before the bus pulls away from the bus stop.

WiGig coverage will undeniably spotty. But speed may well compensate for the lack of mobility, as will dynamic switchover to regular Wi-Fi.

On the infrastructure side, WiGig use cases broadly categorize into point-to-point, point-to-multipoint, WiGig-to-the-home (instead of fibre), and mesh. Ranges for mesh-type units will mostly be limited to a few hundred feet, but vendor IgniteNet is already selling 60 GHz point-to-point product serving up link distances of up to 2.5 km for less than $500.

Meanwhile, Siklu has deployed some 45,000 of their radio units in the 60 GHz and 70/80 GHz bands, and just this year launched a point-to-multipoint 60 GHz system. These are not exactly WiGig standards-based systems, but the quickly growing Siklu footprint says something about what could be in store for the 60 GHz band.

So is WiGig the same as 5G?

Technically it’s not, although the term ‘5G’ seems to have lost most of its original meaning these days. What we can say is that WiGig will support a lot of the same applications that today are being touted as the domain of 3GPP-based (mobile) 5G. And of course – like anything in Wi-Fi – it does this at a fraction of the cost using free, unlicensed bands and low-cost chipsets.

WiGig is also way ahead of any 3GPP-standardised 5G because it’s here today.

The WiGig briefing presented here is sourced from (among others) Peraso Technologies presentation at Wi-Fi NOW Washington DC on April 19, 2017.  Below: ABI Research forecast for WiGig chipsets towards 2021. 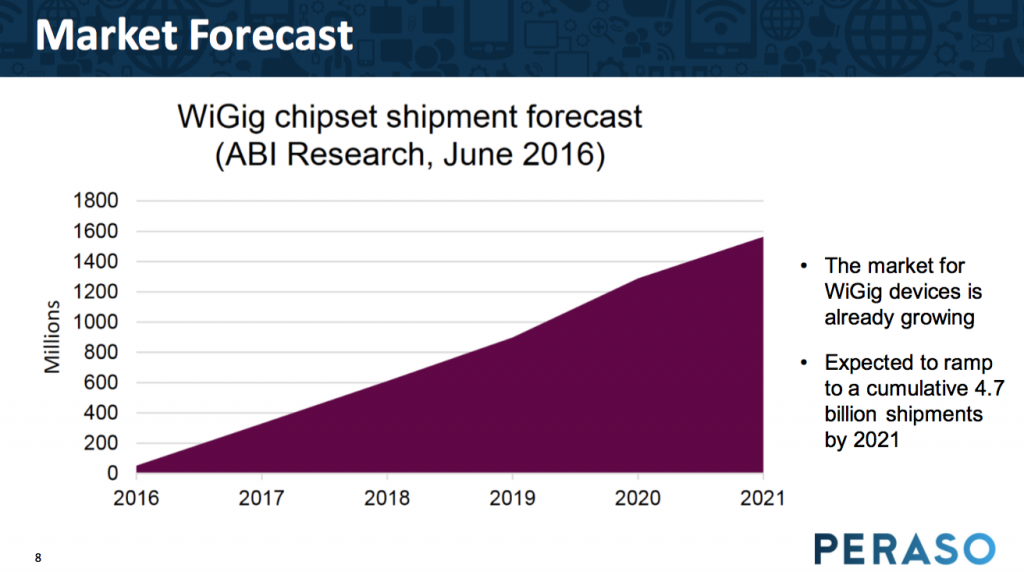